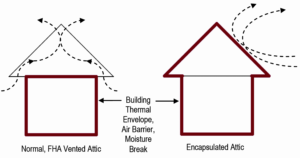 Encapsulated attics are becoming more and more popular in new home construction and among homeowners looking to improve the energy efficiency of their home. It’s not surprising given that an encapsulated attic may reduce the home’s heating and cooling loads, results in a more comfortable attic ambient, and provides a variety of non-energy benefits.

Many contractors haven’t done a lot of work with encapsulated attics (and some have even avoided projects that include one!). The hesitance is understandable. Where does one begin?

What To Ask? Who To Trust?

To begin, it may be that a designer has too many questions and not enough answers. For example:

Answering all of these questions is essential. Unfortunately, until recently, answers have been difficult to find. And if answers were found, it was likely that a different source would have conflicting conclusions.

Encapsulated attic construction has been available for over two decades, with active research on its energy performance being conducted since the mid-90s. Despite this, there wasn’t a central source of information that provided definitive answers to the questions. Building codes didn’t address encapsulated attics until 2004; permit inspectors didn’t have clear directions as to what was required and what was not; no professional association had developed comprehensive guidance; and internet forums often provided contradicting advice and more questions than answers.

In an effort to aid HVACR designers in their quest to find trust-worthy answers, ACCA released a technical bulletin that addresses these questions. In so doing, ACCA developed materials specifically relevant to the HVAC sector, and gathered additional relevant information from various subject matter experts.

What In The World Is An Encapsulated Attic?

Essentially, it’s including the space between the ceiling of the conditioned living space and the roof rafters in the thermal envelope. What differentiates this type of attic from the more common vented attic is that the insulation is not installed on the ceiling (attic floor), but instead is installed under the roof sheathing. In fact, the insulation is even used to completely seal it from outdoor air. That’s it. Makes sense, right? Instead of having a home that has a thermal break between the conditioned living space and an attic that is vented to the outside (and thus the attic is outside of the thermal envelope), you instead have an attic that is included in the thermal envelope.

Well, What About Building Code Requirements?

This is obviously a serious concern for the designer. Prior to 2004, one had to receive special approval in order to build an encapsulated attic (unvented attic systems). Further, explicit design guidance for the HVACR system was non-existent. Since then, requirements for the construction of encapsulated attics have been included in the International Residential Code, and have since been refined as different concerns were identified and addressed.

There are no prohibitions on the construction of encapsulated attics in any region of the country, but the current requirements (2012 International Residential Code) do include some DOE-climate-zone-specific prescriptions related to:

Some code officials have expressed concern regarding (presumably) higher roof temperature, and its effect on the roofing deck, shingles, and shakes above an encapsulated attic. In 2005, the Florida Solar Energy Center conducted a literature review[2] directly dealing with encapsulated attics in hot and humid conditions; one of the topics researched was roof temperature effects. The report found the following:

Finally, it should be noted that “direct-vent” HVAC equipment (sealed-combustion furnaces and water heaters) is the best choice for an encapsulated attic. We arrive at this conclusion by noting that an encapsulated attic is an “unvented attic assembly” and thus cannot support atmospherically vented combustion equipment. Direct-vent appliances are defined by the 2012 IRC as those, “that are constructed and installed so that all air for combustion is derived from the outdoor atmosphere and all flue gasses are discharged to the outdoor atmosphere” and will have no problem supplying the correct amount of combustion and ventilation air.

The Meat Of The Issue

Will an encapsulated attic affect a Manual J8 load calculation and the subsequent equipment selection?

Yes. Though it is still considered unconditioned space, the favorable conditions in the attic could lead to a reduction in duct loads, and thus overall heating and cool loads.

In various ways, but it depends on the specifics.

Encapsulated attics tend to reduce the duct loads (sensible loss and gain, and latent gain), but increase the winter ceiling heat loss. In general, the reduction in duct loads has a greater impact on the overall load calculation, but only if the ducts are located in the technically-unconditioned encapsulated attic. If they’re located in the conditioned space instead, only ceiling and infiltration gains and losses will affect the load calculation as ducts in a conditioned space have no load contributions.

But won’t I need new data for these load calculation procedures?

Yes. ANSI/ACCA 2 Manual J-2011 (Manual J8, Version 2.10) was updated in November 2011 with new information that is essential to conducting a load calculation that includes an encapsulated attic. These are:

If you have an earlier version of Manual J8, you can download the errata changes online here.

Sure. One may reason that encapsulated attics will automatically result in smaller equipment size. Rooky mistake! As we’re painfully aware, not all HVACR designers use (or have used) the ACCA system design procedures found in Manuals J, D, and S consistently. Thus, it’s far from guaranteed that the original load calculation was correct, and that the existing system was properly designed and selected. The actual effect of the inclusion of an encapsulated attic on the equipment selection will be made clear when the designer completes the iterative ACCA system design process. This may or may not lead to smaller equipment.

MOISTURE IS ALWAYS THE ENEMY

This is a no brainer. An encapsulated attic must be comprehensively and perpetually mold and mildew free. A properly encapsulated attic needs to stop all exchange of air with the outdoors, as infiltration is a source of moisture. Then it’s up to the HVACR equipment to properly, and continuously condition the living space. This means that a system’s design needs to account for interior latent heat sources such as winter humidifiers, fish tanks, and potted plants. At no point should the dew-point of the attic air be higher than the temperature of any surface with which it comes into contact.

[1] Parker, Danny (2005).  Literature Review of the Impact and Need for Attic Ventilation in Florida Homes, Florida Solar Energy Center.
[2] See the 2012 International Residential Code for full requirements (also available in the Technical Bulletin).
[3] Testing will be required for non-new construction homes in order to measure the extent to which the encapsulation of the attic has affected the overall infiltration.
[4] Only if the actual build details closely resemble those used in the table. If not, the designer should reference MJ8 Section 18-5 to conduct an energy balance.